As I am sure you may be all aware, the centennial of the Great War, “the war to end all wars” is looming ever closer. And to mark the occasion, it has been decided that I should commission a series of short posts (such as the one you are reading) to mark the events that led up to it, so here goes. And perhaps what better way to begin this series by marking the signing of the Treaty of London, which was signed on this very day as I type, 100 years ago. A treaty that marked the formal ending of the First Balkan War! What you see below is a map of how what the Balkans looked like, after this Treaty and to commemorate the signing of it, what I am going to do in this post is give you a very basic guide to the territorial changes for the Balkan nations as a result of the first Balkan War. Of course, if there’s anything you feel that I have missed, feel free to point it out to me. 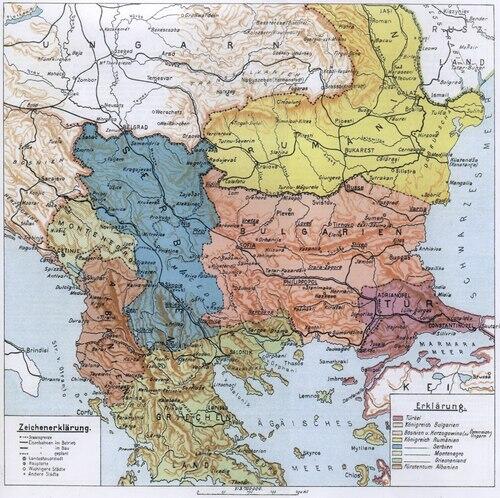 Crete was allowed to become formally unified with mainland Greece in accordance with the latter’s demands for “enosis”. Note this: officially the enosis took place during December 1913 with the ceremonial raising of the Greek flag at the city of Chania.

The Treaty of London also confirmed Albania as a independent state in the eyes of the western powers, but this didn’t mean all its peoples belonged to it. Instead, its borders had to be decided by an international commission due to the fact its neighbouring states in the Balkan league also had substantial Albanian populations. And it was this that meant Kosovo (whose inhabitants are mostly ethnic Albanian) would come into the fold of the Kingdom of Serbia, for example. So one can easily guess Albanians have a mixed opinion of this treaty? For a brief time (until WW1) the ancient port of Vlorë was made the new capital and its politics resembled a western style monarchy, lasting until 1925 when Albania became a republic.

As for the Kingdom of Serbia, it got from the war and the Treaty of London a practical doubling of its territory, through expanding southwards into Kosovo and Macedonia, although the Kingdom was frustrated by not having a slice of the Adriatic coast. This, with a growing Serb nationalism and dreams of all the Serb peoples united under one single state, was not healthy. And this nationalist dream included all the Serbs residing in Bosnia and Herzegovina which at the time was under the jurisdiction of the Austria-Hungarian Empire through it being annexed in 1908. This dream would go on to have ramifications with regards to the assassination of Archduke Franz-Ferdinand, But I think I can save this for another time. I would also like to note that Serbia also shared its spoils in the region of Sandžak with Montenegro and thus the latter got a slight expansion of its territory.

As for Bulgaria, it got territorial expansion to include Black and Aegean sea coastal regions thus becoming the largest of the Balkan nations, as you can see on the map, yet was left physically weak due to it’s large role in securing the Balkan league’s victory over the Ottoman Empire

And finally? Perhaps one should spare a thought for the suffering peasants of Macedonia who did not get any independence! Instead, their land became a flashpoint of conflict between especially Bulgaria and Serbia over who should own what part of it. But I think I might just save my thoughts about the second Balkan War for another time.

9 thoughts on “Countdown to ww1: The end of the First Balkan War.”