You’ve probably seen this story else where by now but it is simply too amusing to let pass without comment. In the UK Church of England priest Tim Jones has been instructing his congregation to shop lift.

Speaking to his congregation on Sunday, Father Jones said: “My advice, as a Christian priest, is to shoplift.”

Well most Christians already ignore the 4th commandment so why not just throw out the 8th as well. Now before you worry that following such advice isn’t exactly going to benefit your local community Father Jones is quick to place restrictions on his criminal instruction.

“I would ask that they do not steal from small, family businesses, but from national businesses, knowing that the costs are ultimately passed on to the rest of us in the form of higher prices.”

Ah, well as long as you are only stealing from places that can afford it then I guess it is all alright then. But of course Father Jones is quick to point out that his advice is not for everyone.

“When people are released from prison, or find themselves suddenly without work or family support, then to leave them for weeks and weeks with inadequate or clumsy social support is monumental, catastrophic folly.

“We create a situation which leaves some people little option but crime.”

Well ok, I have to give him that one. If you’ve just gotten out of prison and are having problems making end meets, can’t afford food and lodgings then, yes, shop lifting is the way to go. In no time flat you will find yourself back in a warm room with three square meals a day completely free of charge, and probably access to a pool table and a flat screen television as well. Just don’t plan on going anywhere any time soon. 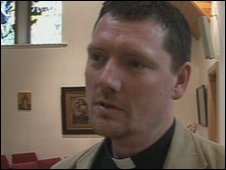 I have to say I am not really that surprised by all this. I mean look at the guy, he just looks dodgy. Are we even sure this guy is a real priest? Seriously how do you think this idea came to him? Going by where most of the crazy ideas in the Bible came from I’m guessing it came to him in a dream. He probably dreamt that he and God were walking round Tesco when God nudges him and in a whisper says “See the toaster, stick it under your jumper.”

The only thing that would make this story better would be if he had been a Catholic priest, sitting on a golden thrown throne in his palace, informing this congregation that they only way the Church can help them in their plight is to offer advice on shop lifting. Best priest/shop lifting related comment wins a prize…well, ok no it won’t but we can pretend.

4 thoughts on “How to save money at Christmas”