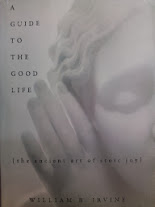 In his book modernising the ancient Greek philosophy of Stoicism (A Guide to the Good Life: The Ancient Art of Stoic Joy), William Irvine proposes two criteria for a coherent philosophy of life. The first is to have an ultimate goal in living. Of the things that can be pursued in life, the ultimate goal is the one you find most valuable. It is a grand goal that sits at the top of a hierarchy and is something you would be unwilling to sacrifice in the pursuit of other ends. Without an ultimate goal, a philosophy of life is incoherent.

According to Irvine, the second component in a coherent philosophy of life is a strategy for achieving your ultimate goal. The strategy tells you how to go about your daily routine in a way that enhances your ability to achieve the thing in life that you define as the most valuable. Without an effective strategy you will likely fail to achieve your grand goal and so a coherent philosophy of life needs both an ultimate goal and the means to achieve it.

Everybody has a philosophy of life, it’s just that most people don’t think about it. For such an important topic, philosophy of life isn’t discussed at school, universities don’t offer courses, and treatment of these topics in popular culture is next to zero. Without proper consideration of this issue, the life philosophy foisted upon most people is enlightened hedonism. The ultimate goal in hedonism is pleasure and the ‘enlightened’ part refers to the strategy. An enlightened hedonist takes time to consider which pleasures they will pursue, at what time they would like to enjoy those pleasures, and the best method for obtaining them. Another thoughtless source of a semi-coherent life philosophy is an inherited religion. In a typical religion the goal is to obtain a good second life and the rules and precepts lay down the way to achieve that goal. Since everybody has a life philosophy the only difference between people is whether they have thought about their ultimate life goal or have just accepted it.

The biggest danger with having the wrong life philosophy is the chance that you will mislive. Despite all the things you did at the end of your life you will look back only to realise you did not live it the way you wanted to. Either you chased the wrong goal or, if you had the correct goal identified, you were unable to live up to it. As Irvine puts it “Instead of spending your life pursuing something genuinely valuable, you squandered it because you allowed yourself to be distracted by the various baubles life has to offer.” An enlightened hedonist may realise the pursued pleasures did not really bring what was most desired and the religionist may come to the understanding that their strategy will not bring eternal life after all. Without a suitable philosophy of life you will waste the one and only life you know you are going to get.

Some alternative answers to the philosophy of life question are: virtue, tranquility, happiness, connection, service, exploration, and usefulness. My suggestion to you is to find your own answer to the question “what do I want out of life?” Ultimately, your grand goal in living is the most important thing for you to discover. Understanding it will change your life – for the better.

11 thoughts on “Philosophy for life”