So, in the space of less than a week, I have caught out twice two different Neo-Nazi holocaust deniers on Twitter trying to use (or rather abuse) this ITS B.A.D Arolsen file against me (at the bottom of the post) in their mad claims that the true total of Jewish deaths is lower than the approx 6 million figure that I and every other scholar who is not a Nazi or a racist accepts as the truth (on a range of various sources; see Lucy Dawidowicz, “The War Against the Jews: 1933-1945”; Raul Hilberg, “The Destruction of the European Jews”; Peter Longerich, “Holocaust: The Nazi Persecution and Murder of the Jews”; and Arno J Mayer, “Why did the Heavens not Darken?” among many many other excellent titles).

For those who do not know, the ITS B.A.D Arolsen is, as it says on its website, “a centre for documentation, information and research on Nazi persecution, forced labour and the Holocaust.” It’s an excellent service and I would recommend in the same vain “The Central Database of Shoah Victims’ Names” by the Yad Vesham Center which has painstakingly compiled “the biographical details of two thirds of the six million Jews murdered by the Nazis and their accomplices.” For those who do not know too much about the Holocaust, I would highly consider you visit both websites together and fully digest them, so that one may begin to get an understanding of the actual vast scale of the tragedy of the Holocaust, for both document it. Unsurprisingly, no Neo-Nazi I have ever had the unfortunate luck to to run into has ever admitted to liking full documentation. It proves too much truth. Take for example the following written by General Commissioner Wilhelm Kube on 31 July 1942, which is arguably one of the most explicit documents about the Nazi mass extermination. No denier has ever managed to explain this one away to me, and I don’t expect any to. Thus far I have quoted it in all debates I have ever had with Neo-nazis, even on this very forum.

“In every encounter with partisans in White Ruthenia, it has been established that in the former Soviet part of the district general as well as in the former Polish part the Jews together with the Polish Resistance Movement in the East and the Red Army men of Moscow are the mainstay of the partisan movement. As a result of this, and in view of the danger to the whole economy, the treatment of the Jews in White Ruthenia is a predominantly political matter which, therefore, should not be solved according to economic but political angles. During detailed consultations with the SS Brigadefuehrer Zenner and the extremely capable Chief of the SD, SS Obersturmbannfuehrer Dr. jur. Strauch, we found that we had liquidated approximately 55,000 Jews in White Ruthenia during the last 10 weeks. In the Minsk-Land area, the Jewry was completely exterminated, without endangering the allocation of labor in any way. In the prevailing Polish Lida area, 16,000 Jews, in Slonim 8,000 Jews, etc., were liquidated. The preparations for the liquidation of the Jews in the Glebokie area were completely disrupted by the arbitrary action by the rear army area, which has already been reported to your office. In the rear army area , I was not contacted , 10,000 Jews were liquidated who were scheduled for extermination by us anyway. In the city of Minsk about 10,000 Jews were liquidated on 28 and 29 July, 6,500 of whom were Russian Jews , mainly old people, women, and children , the remainder consisted of Jews unfit for work, most of whom had been sent to Minsk from Vienna, Brno, Bremen, and Berlin in November of the previous year at the Fuehrer’s orders.

The Slutsk area was also ridded of several thousand Jews. The same applies to Novogrudok and Vileika. Radical measures still remain to be taken for Baranovichi and Hanzevichi. In Baranovichi, about 10,000 Jews are still living in the town alone, 9,000 of whom will be liquidated next month. In the town of Minsk, 2,600 Jews from Germany have been left over. Besides, all the 6,000 Jews and Jewesses are still alive who have been working, during the action, with the units who had employed them previously. Even in the future the largest Jewish labor force will be in Minsk, since the centralization of armament industries and the burden on the railways makes this necessary for the time being. In all other areas the number of Jews utilized for labor by the SD and myself will be fixed at 800 at the outside but at 500 if possible so that after the completion of the action 8,600 Jews will remain in Minsk and approximately 7,000 in the 10 remaining territories, including the territory Minsk-Land, which is already free from Jews. The danger that the partisans will, in future, derive any important support from the Jews will then have ceased to exist. I myself and the SD would certainly much prefer that the Jewish population in the district general of White Ruthenia should be eliminated once and for all when the economic requirements of the Wehrmacht have fallen off. For the time being, the necessary requirements of the Wehrmacht who is the main employer of the Jewish population are still being considered. The clear anti-Jewish attitude of the SD and the difficult task of the units in White Ruthenia to deliver again and again new Jewish transports from the Reich to their destination, both put an undue strain on the physical and spiritual strength of men of the SD and diverts them from their real purpose, which lies in the White Ruthenian region itself.

I should therefore be grateful if the Reich Commissioner could see his way to stop further Jewish transports until the partisan threat has finally been overcome. I must make 100 percent use of the SD against partisans and against the Polish Resistance Movement, both of which demand the use of the full strength of the SD units, which are none too strong as it is.

After the conclusion of the anti-Jewish action in Minsk, Dr. Strauch, SS Lieutenant Colonel, reported to me tonight, with justifiable wrath, that without any order from the Reich Leader SS and without notification of the commissioner, a transport of 1,000 Jews has suddenly arrived from Warsaw for use in this air fleet area.

I should like to ask the Reich Commissioner (who has already been advised by teletype), in his capacity as the highest authority in the Ostland, to stop such transports. The Polish Jew is, exactly like the Russian Jew, an enemy of all that is German. He represents a politically dangerous factor, the political danger of which exceeds by far his value as a specialized worker. Under no conditions must Wehrmacht agencies of the army or the Luftwaffe, be allowed to import, without the approval of the Reich Commissioner, into an area under civil administration, Jews from the General Government who might endanger the entire political work and security of the district general. I am in full agreement with the commander of the SD in White Ruthenia, that we are to liquidate every Jewish transport which has not been ordered or announced by our superior officers, so as to avoid further unrest in White Ruthenia.” – Source

so they always turn to tidbits, lunatics and distortions to make their case, tactics that are of course very familar to the Creationists on this forum and they easily belong in the same category of stupid (even if somewhat more offensive perhaps). This is what brings me to the following document you see now: 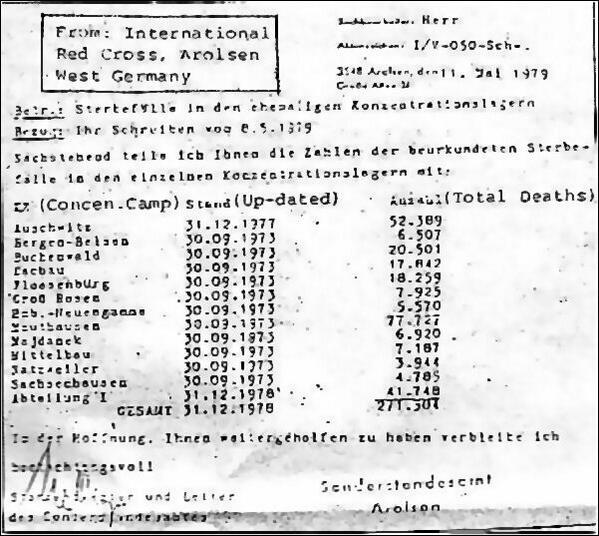 What do we have here? Although I will not say I am 100% sure on this namely because actually up until this week i hadn’t seen it, but I’ll take my cue from this which is another excellent website on Holocaust education and specialises in refuting denier arguments. From that I am inclined to believe we have a 1979 document taken out of context by the deniers that, in actuality, represents figures for applications to death certificates made by family members and relatives of the victims. Of course, if an entire family had died in the holocaust, there would be no one around left to make an application. Remember, this document comes from 1979, so it’s one thing the figures seen would be incomplete even in that department anyway by modern standards, families since would have made claims. It’s entirely something else that the figures within cannot describe final numbers of Holocaust dead like in the way the deniers are spinning this document.

10 thoughts on ““What about this document?” Holocaust deniers make me sick!”