Often I have had skeptics say “You keep arguing against evolution – what are your arguments for creation?”

This is a very fair and open question; because creationists seem to believe (as Juby goes on to demonstrate); there is a dichotomy when it comes to the Origins Debate. It appears that all creationists believe that they simply have to disprove evolution in order to prove creationism. However, this is not the case, creationism (young earth creationism especially) has been disproved for the last 200 years. Thus, proving evolution wrong will not make creationism true.

While this is a fair question, something does need to be clarified before proceeding:
The scientific method is one based upon falsification.  In other words, you cannot really “prove” anything – you can only “disprove” something.  Furthermore, creation and evolution really do rule out all other possible models.  For example, suggesting that aliens transplanted us here on earth (and thus answering the question “where did we come from?”) does not answer the question “From whence did we come?” It is actually intellectual cop-out – it only brings up the question “Where did the aliens come from?”

Juby makes this statement without realizing the irony of what he has just done. One only needs to change a few words and Juby has virtually made a great case against his position.

Again, here we have Juby admitting that creationism is nothing more than magic while at the same time projecting that fault onto evolution and science in general. There is nothing supernatural about evolution and evolutionary theory. We have evidence in the way of genetics, fossils, etc… Juby’s shameless projection will do nothing to diminish these facts. Furthermore, it does not boil down to creation or evolution, no matter how much Juby wants to set up that false dichotomy. Evolution is the only explanation for the diversity of life on earth, while creationism has never been anything more than belief in magic, as Juby so readily points out.

One example of evidence for creation comes from my good friend, John Mackay (http://creationresearch.net).  As he points out, ten times in the first chapter of Genesis it says God created things to reproduce after their kind.  Evolution requires things to change over time, and so we thus have another scientific test to apply to the creation/evolution debate.

Before Juby could move on from this, he would have to define kind in a scientific context. I have blogged about this idea earlier and pointed out that as soon as a creationist defines kind they have lost; because it is effortless to show evidence that all species of animals share a common ancestor. Thus, Juby (and Mackay) have given us away to falsify creationism in their own words. 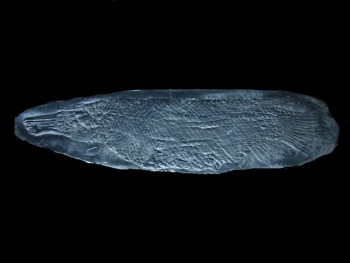 Stasis in the fossil record:
“Stasis” is a huge problem for evolution.  “Stasis” simply means that things stay the same – for example, on the right is a cast (in the collection of the Creation Science Museum of Canada) of a fossil garfish.  How do we know it’s a garfish?  Because they are still around today, and they have stayed the same.

Instead of being evidence for evolution, this is evidence that garfish have faithfully reproduced after their kind.

Stasis is not a huge problem for modern evolution. It might have been a problem for early ideas of universal gradualism, but we now know that stasis is a normal part of life on earth. Think about this, evolution only happens when there is need for change (e.g. changes in climate). If the climate an organism lives in changes very little over geologic time, the organisms found in said environment would also change very little.

However, even with that said, there are still build-ups of neutral mutations that will change an organism ever so slightly over the eons. Thus, the fossil garfish Juby shows a picture of (and this is true for all the examples Juby gives) is not the same species as the modern version. So, depending on how Juby would define kind this example (and all others provided) could be examples of kinds changing over time. 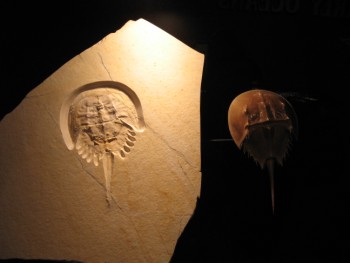 Juby throws out the term “horseshoe crab” as if it were a species level designation; it is not. Horseshoe crab (Limulidea) is a family level classification that holds three living genera and one extinct genus.

Furthermore, Juby exposes how little he knows about taxonomy by acting as if Limulidea were a species level designation. In fact, this whole lesson is an example of how little Juby knows about taxonomy, cladistics, and basic biology. To make an analogy, Juby is saying they found a species of cat (Felidae) that dates back to 16 million years ago. How did they know it was a cat? Because, it looks like one. The traits that make a Limulidea a Limulidea (or a cat a cat) are the traits used by scientists in order to classify them in relation to other organisms. This includes species as diverse and different as house cats, lions, and extinct species such as Smilodons.

This fossil fish (part of the CSMC collection) is from the Green River formation – supposedly 50 million years old.  This is a fossil herring.  Commonly called “Knightia,” wikipedia claims it has become extinct.  Compare the photos yourself – the one on the right, to the wikipedia photo of a herring:
http://en.wikipedia.org/wiki/Image:Herringadultkils.jpg

Unfortunately, it is confusion in the latin names that has caused some evolutionists to become convinced that evolution has happened.  Knightia is not even the same genus as the herring (Genus Clupea).  In fact, as Vance Nelson has pointed out, often the only evolution in an organism is in its latin name!  In other words, the modern, living version of a fossil organism is often classed in a completely different genera than the fossil, giving the appearance of having major differences when there isn’t any.

Juby is asking his non-scientific audience to compare a fossil skeleton to a living fleshed out fish. You have to be kidding me.

Juby has already exposed that he knows nothing about human anatomy (let alone any other animal’s anatomy), so what makes anyone think he is qualified to question the classification of any organism. Furthermore, based on the they look the same argument I am sure Juby would argue that mammoths, mastodons, and modern elephants were the same animal. 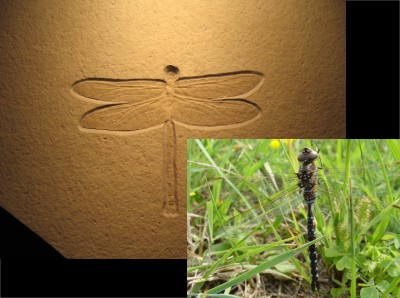 Usually I don’t need to tell people what the fossil on the right is (courtesy of the Big Valley Creation Science Museum).  It’s a dragonfly – and there is a photograph of a modern counterpart.  Dragonflies have evolved into dragonflies.

This example falls under all the arguments I have made thus far (Juby’s ignorance of anatomy, cladistics, misunderstanding of stasis, and thinking dragonfly is a species level designation). The only main difference is that dragonfly (Anisoptera) is considered a suborder classification, even worse than his Limulidea example.

First off, this is not evidence of creationism at all. It is only evidence of Juby’s basic ignorance (or blatant misrepresentation) of taxonomy. In addition, Juby goes on to straw man evolution by comparing it to a fairy tale, which again is an example of him projecting the faults of creationism onto evolution. He further goes on to expose just how little he actually knows about evolution (or another blatant misrepresentation) by stating “evolution requires a second frog turning into a princess at precisely the same time and place.” Obviously, Juby does not know that evolution happens to populations and not individuals, thus stating something this ignorant is inexcusable for someone who claims to have studied the Origins Debate for as long as Juby claims.

One of the classic examples of a “living fossil” is the Coelacanth (pronounced See-la-canth).  Once thought to be a precursor to the fish that walked onto land (in the evolutionary belief system), it was also believed to have been extinct for some 70 million years (i.e., went extinct the same time as the dinosaurs).

Then one was caught alive in the 1930’s.  Schools of them have been found since.  This was akin to finding a Stegosaurus in your back yard!
The coelacanth first appears in the fossil record some 450 million years ago, and has remained essentially unchanged.
(Photo courtesy of Max Planck institute, click here to see the Chicago field museum’s page on the coelacanth.)

First off, the photo he used was too large to be included in this blog and I will not be bothered to look for another one (everyone already knows what the fish looks like). Second, since this is, as Juby points out, the classic example of a living fossil for creationists, I will repeat myself and explain the mistakes Juby is making when it comes to the Coelacanth.

The first mistake is that Juby acts as if Coelacanth (Coelacanthiforme) is a species level designation. Coelacanthiforme is an order classification with several species found within it. Coelacanthiformes were never thought to be a precursor for tetrapods, but a very close relative of the first tetrapod lineage.

Now some anti-creationists will contend that there are changes in these organisms.  When one examines the claims closely, one finds the claim is primarily speculation, i.e., the internal organs of the coelacanth are assumed to have changed over time (see my commentary on the NOVA Coelacanth program and why the coelacanth is not evidence for evolution).  The few minor variations we do see are still well within variation within the species.

We can see evidence of evolution from the first Coelacanthiforme, Litoptychius, found in the Devonian all the way through Macropoma the last Coelacanthiforme found in the fossil record. Second, as I pointed out Macropoma was a shallow sea fish and there are many species of Coelacanthiforme that were fresh water fish as well. That alone would be a major change in their anatomy; something Juby probably would not understand because he thinks all fish would have survived the flood. Juby would not understand that salt-water fish and fresh water fish have different ways of coping with their environment. Furthermore, Litoptychius is a deep-water fish, and in order for it to survive at the water pressure it does, means major anatomical differences from any of the fossil versions we have. Again, I doubt Juby would understand this. He believes animals can move well being incased in mud.

Living in fresh water, shallow sea, and deep sea are not tiny differences. Furthermore, stating that the variation between breeds of dogs is greater than the variation it would take to live in three completely different environments is just asinine and once again exposes how little Juby understand biology.

So many living fossils, so little time…
There are far, far more examples of living fossils around today.  See part 10 of “The Complete Creation” video encyclopedia, still viewable for free on my website:
http://ianjuby.org/videos.html

That simply means there are far, far more examples for Juby to misrepresent and display his utter lack of knowledge about taxonomy, cladistics, and basic biology. Stasis is very well understood in evolutionary theory. Punctuated equilibrium explains the stasis we see in the fossil record. Nevertheless, for every example of stasis Juby could find, I could find an even more dramatic example of transition. From horses to whales, and even in our lineage, we have great examples of transitional life forms.

Coming up in the next lesson:
What would Jesus believe?