Day 4:  Dinosaurs and the flood of Noah 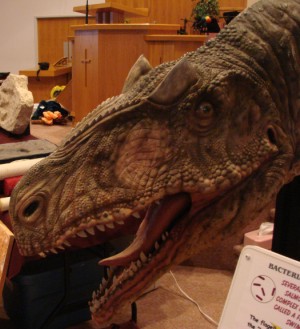 Meet “Big Al.”  Big Al is an Allosaur (Allosaur means “different” or “strange” lizard) from Howe Ranch of Wyoming.  He was found in the “Death pose” – his head was arched back as far as it could go.
This is common in the fossil record.  Technically known as the “Opisthotonic” posture, it is a sign of being asphyxiated to death and rapid burial.  In fact, the rapid burial may have caused the suffocation that caused the opisthotonic posture!

First off, it is rare to find an animal as large as Allosaur articulated in the fossil record. I am not saying that it is impossible, but seeing as how Juby does not provide a picture of the actual fossil in situ is quite telling (especially since he does provide pictures of the fossils for all the other examples he has. Second, this is common only among articulated specimens. The vast majority of fossil specimens discovered are disarticulated, meaning they were not rapidly buried. If Juby is truly trying to claim that all the animals found in the opisthotonic position are evidence of a flood, than that would mean specimens discovered not in that position and disarticulated specimens would be evidence of not dying in a flood.

Third, suffocation is not the only reason for an animal to end up in this position. When animals die their tendons and mussels can retract or relax pulling the body into different positions. This seems to be the more likely cause for the death pose simply because the tails along with their heads are pulled back towards the body. I will leave it up to the reader which they think caused the vast majority of the death poses seen in some fossil specimens, but either way, it would not be evidence of a worldwide flood nor would a world wide flood disprove evolution.

One last thing, Juby suggests that the rapid burial of an animal may have caused the suffocation, which caused the opisthotonic position. Does Juby truly believe that an animal would be able to move once it is incased in sediment and has tons of water over head? This seems to be a very asinine suggestion, one that would only be suggested by someone who does not understand just how much sediment and water weighs. 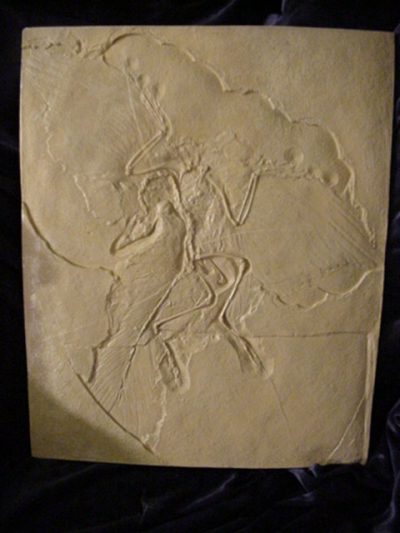 For example, Archaeopteryx – the supposed half-bird/half-reptile is also found in the death pose.

The death pose was common enough that some tried to speculate as to the cause – perhaps it was the result of the creature lying out in the desert, and the tendons dried up, pulling the head back?  But this does not stack up to the evidence, as the backs of the legs of these creatures also have large, strong tendons – and the legs are found in various positions.

Again, a case-by-case examination of the fossils would have to be done for each fossil to determine weather the animal died in a flood or by other means. I do agree that the Archaeopteryx specimen shown above probably was not lying around well the tendons dried up (I say this because of the fossilization of the feathers, which suggest rapid burial). However, I also do not think this specimen is fossilized in the position that it took its last breath in. Look how far back the head is from the body. It seems to be in a very unnatural position. 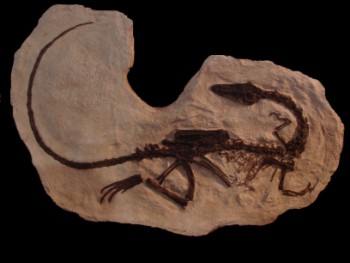 A new addition to the collection of the Creation Science Museum of Canada was this Coelophysis, coming in at almost four feet long, from the Ghost Ranch of New Mexico.  Hundreds of these dinosaurs have been unearthed there, and I do not know how many were found in the death pose, but I think it safe to say the majority of them.

I have been to this site and seen several specimens of Coelophysis from there. The fossil replica that Juby uses here is easily apart of the most famous fossil collected from New Mexico. Here is a photo of the actual fossil on display at the American Museum of Natural History:

That is the Coelophysis exhibit at the New Mexico Museum of Natural History and Science. The photo below shows what the animals would have looked like fleshed out.

Only two of them appear to be in the death pose. Yet, it is thought the Coelophysis remains from Ghost Ranch were produced by a flash flood. The animals would have gathered around a dried/drying riverbed and a flash flood would have washed them down stream drowning them in the process. The river would have washed their bodies onto a bank were they would have been rapidly buried by the river. Furthermore, at the site there is evidence of multiple deposits of animals being drowned in flash floods, this was not a one off event, which we would expect from a worldwide flood. One is able to tell flash flooding caused this by the way the sediment is deposited. 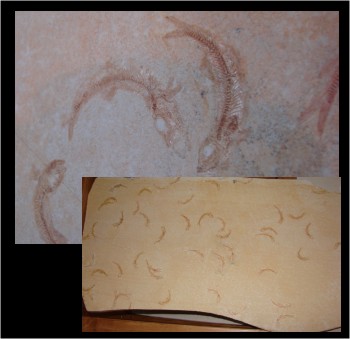 However, it is not just the land animals that are found in the death throes.  These fossil fish are part of Edgar Nernburg’s collection in his creation museum in Calgary, Alberta.  What would cause these fish to arch their backs while they were buried so fast that they were captured in that position?

Juby seems to be suggesting that the sediment that trapped them suffocated the fish displayed in this fossil. Again my question to Juby would be does he really believe that these fish would have been able to move buried alive under sediment and water?

Anyone that has lived/visited a desert can tell you why those fish appear the way they do, and it is because they were stranded on land and dried up in the sun, very common site to see in the summer here in New Mexico.

The extent of the layers containing these fossils, combined with the way we find these animals is excellent evidence for a global catastrophe, specifically, a global flood.

No, it is not, and for the simple reasons I have pointed out above.

The Bible records a global flood at the time of Noah, yet the evolutionary interpretation of these layers is that of deep time, and not a global flood.

Again, Juby is conflating evolution, and in this case, I would say he is not only doing it with geology, but with modern science. Second, the bible says many crazy things, and frankly, no one who cares about science or history should take it seriously. Thus, I do not understand why Juby thinks citing it as evidence matters in the least.

I had been arguing for the death throes being evidence of catastrophe, and evidence for Noah’s flood, for several years.  I was greatly pleased to see the July 2007, Journal of Paleobiology article by Kevin Padian and Cynthia Faux.  The pair of scientists had carried out various experiments on muscle and tendons from the butcher shop, salting them, drying them, soaking them in water, etc…
They concluded, after many experiments, that the “death pose” was the result of pre-mortem activity.  In other words, it was death throes, followed by rapid burial which preserved the position of the animal.

As I stated before, for every specimen found in the death pose, we have several others that are not. In addition, as I have shown with the Coelophysis specimens from Ghost Ranch, the death pose is not good evidence of flooding, sedimentation is. Thus, I wonder why Juby is wasting our time with death poses in dinosaurs when he should be able to present the sedimentation of a worldwide flood.

Coming up in the next lesson:
Dinosaur Egg Nests: An argument against a global flood?