Whoever you are, we are not equals.

You might be a person living in a less economically developed country. In that case, we might be equally happy, but chances are I’m more educated (not intelligent, mind), healthy and have a better standard of living than you. We are not equal.

You might live in a more economically developed country, but you might be a woman. Although you are more likely to live a longer and healthier life and be more educated, I have better chances of getting a better-paid job, I am less likely of having to quit my job for the kids and I am less likely to work part-time. We are not equal.

You might be male, with the same education and chances of getting a job as I do. But you might be shorter than me, which increases my chances of me getting a better-paid job than you. You might be less fit, bald, etc. We are not equal.

But let us suppose that we are, in all the above mentioned respects, identical. We are both men, 22 years old, with an almost complete tertiary education degree. We are both 187cm tall, reasonably fit and with full hair. We are still not equal.

At this point, you might either understand what I’m getting at or you might be in utter despair. How are you not equal? 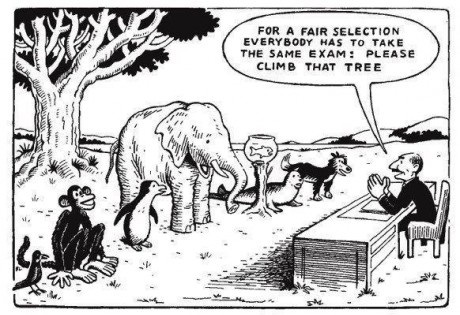 We are, however, of equal value. It’s harder to make this distinction in English than it is in, for example, German. In German, we use the word “Gleich” to describe “equal”, “Gleichberechtigt” to say “of the same right” and “Gleichwertig” to say “of the same value”. In English, “equality” means all of these. I will get to one last thing it means in a second.

Everybody has a different set of talents. Whether you are a woman, chinese, a man, black, short, bald, hispanic, or anything else… there are some things you are good at and some things you are less good at. These things make you you, perhaps unique, but they do not make us equal.

Now, I talked of equality one paragraph up and mentioned a further word. Equality can also be understood as “sameness”. That’s the real danger with “equal” and “equality” I see. We miss the larger point: We are individuals and we need to be treated accordingly.

Joss Whedon’s speech “Equality now” is a beautiful speech about the equality of women. He explains why he writes “such strong female characters” and why he thinks we should have equality now rather than later.

However, equality doesn’t cut it.

So I suggest the much underused “equity” and I will even suggest that equality, at least in the way described above, is not what we want in many cases.

We want equality in racial matters, when it comes to LGBT-rights and so on. But ideally, we want equity when it comes to economic matters, to matters of handicaps (in whichever way they might come) and also in schooling. (Giving resources especially to kids who don’t meet the minimum requirements.) Equality can be applied wherever there is no inherent (dis)advantage on one side, while equity applies in exactly those cases.

After all this, you might ask for my justification. “Why do you want either equality or equity?”, you might ask. “Every person is the architect of his/her fortune.”

This would be the case if ours were a Darwinian society. Luckily, in my opinion, it’s not. We take care of others because we have some sense of moral duty. We take care of them because we want to be taken care of when we’re in trouble. We also do it because we ourselves profit from equity.

There’s lots and lots I could talk about on this subject, but I want to get some discussion going. Do you think this is purely semantic? If there are changes, what will they be?