Day 5:  Dinosaur Egg Nests: An argument against a global flood?

I’ve had numerous skeptics try to use dinosaur egg nests as an argument for an old earth, and to counter the claim that the rock layers we see around the world were formed by Noah’s flood.  After all, if those layers were made by Noah’s flood, how did the dinosaurs lay nests on the bottom of this raging, world-wide ocean?

I have actually never heard this argument made against creationism, but it is a good one. Truly think about a flood and how destructive they are, even a small-scale one. Does anyone truly believe that a nest of eggs would be preserved during a flood of any scale?

Such comments betray a lack of knowledge of what the Bible says, and what Noah’s flood would accomplish, how, and when.  The Bible indicates that Noah’s ark did not float until the 40th day after the start of the flood – that’s almost a month and a half! (Genesis 7:17)  During the flood of Noah, tides would still be in effect – in fact, they would be enhanced as more and more of the land becomes submerged, and thus resistance to the tides become less and less.

Thus, every twelve hours, you have a tide flowing inland, laying down a new layer, and then flowing out during low tide.  Because the waters of the flood are continually rising, the next tide that comes in will be higher than the last, and so it lays down another layer.  During low tides, dinosaurs, people, and other animals will go out onto these new tidal flats as they forage for food or try to get to higher land.  Footprints are made during this time, which harden into rock and become fossil footprints.

Dinosaurs carrying their eggs during this time ( a period of weeks at least) are going to do one of two things: They are either going to ditch the eggs, or try to lay a nest.

I will not argue against a global flood having larger tides, and I will just accept his premise. This leads to an experiment that Juby can perform in order to verify his hypothesis. Juby could take eggs from various species of birds and other reptiles today, place them in mock nests in a tidal zone and record the experiment. He can see whether the force of the tides bury the nests or destroy the nests and move the eggs to different areas. Since Juby believes that the tides would become larger and larger as the flood went on he can also try this experiment in different locations (e.g. Minas Basin, in Nova Scotia) in order to truly test his hypothesis.

Now, Juby travels around the U.S. and Canada with his traveling creationist museum. During his travels, he could stop at different coastal cities and perform his experiment in order to verify the claims he is making. The fact that Juby has not already done this speaks volumes about how much stock he actually holds in his hypothesis. On the other hand, Juby is a creationist; they never perform experiments to test their hypotheses.

Furthermore, Juby alludes to the tides during this worldwide flood creating different sedimentary layers, thus accounting for the geologic column we see today. This is a very sophomoric look at sedimentation and does not account for major features found in the geologic column (i.e. angular unconformities, lava flows, eolian sandstone, and shale; just to name a few). Additionally, flooding would sort sediment by grain size and in many places in the geologic column; this is simply not the case. 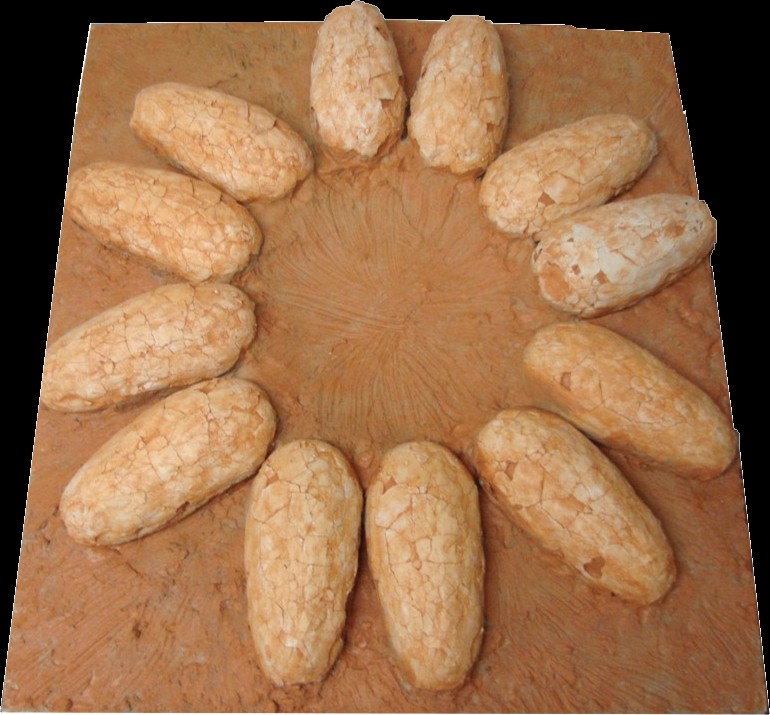 On the right is a reconstruction of an Oviraptor egg nest.  Most dinosaur eggs are found in a disordered state, not an ordered one like this.  We will focus on the “ordered” nests here.
This nest would be a text-book example.  The Oviraptor apparently stood in the middle of the circle, and apparently laid eggs in pairs, toward the outside.  It would then rotate, lay another two eggs, rotate, lay another two eggs, etc… It would then sometimes lay a second level on top of the first circle, and sometimes a third level.

Juby claims that Oviraptors laid eggs in pairs yet cites no evidence to support this claim. Based on birds and crocodilians (the closest living relatives to dinosaurs), I highly doubt that Oviraptors would have laid their eggs in pairs. Nevertheless, I digress, where is Juby going with this?

Oviraptor was originally so named because it was found associated with some dinosaur eggs.  The evolutionary assumptions of “Survival of the fittest” and “there has been no global catastrophe” led to the conclusion that it was stealing the eggs for food.  This led to the name Ovi-raptor; ovi for egg, raptor for thief.

Later on however, an identical egg was found with an embryo still inside of it.  As it turns out, these were Oviraptor eggs!  It wasn’t stealing the eggs for food – it was the mother trying to protect the nest from whatever catastrophe buried it and the eggs together!

There is just so much wrong in this, it is hard to know where to start. First, there have been several mass extinctions in earths passed, and paleontologists have often speculated about some sort of global catastrophe behind all of them. Juby is just upset because a global flood is not one of them. However, Juby is correct in pointing out that the eggs belong to Oviraptor thus the name is misleading. Nevertheless, what Juby does not tell you is that the people who corrected the old ideas of Oviraptor being an egg thief were actual scientists, not creationists. I do not understand why Juby thought this was relevant to point out. The evolutionary assumptions of these finds is still evident, even in the wikipedia article on Oviraptor citipati.  This was an Oviraptor found buried alive sitting on its nest:
“This brooding posture is found today only in birds and supports a behavioral link between birds and theropod dinosaurs.”

Juby seems to be missing the point of the fossil cited, he even admits that the Oviraptor was sitting on its eggs, something birds do and other reptiles do not. Whether this fossil was formed by a flash flood, sandstorm, or global flood it appears the Oviraptor was in the brooding posture.

Furthermore, Juby also fails to understand the vast amount of evidence that links therapod dinosaurs, such as Oviraptor to birds (e.g. feathers, hollow bones, skeletal anatomy, etc…). In addition, Juby believes that a wall of water (which would be produced in a worldwide flood) burying this Oviraptor in the brooding posture is logical. Does he not understand the physics that goes into a flood (small or large scale)?

Next, we move onto Juby’s biggest blunder of this whole crash course: 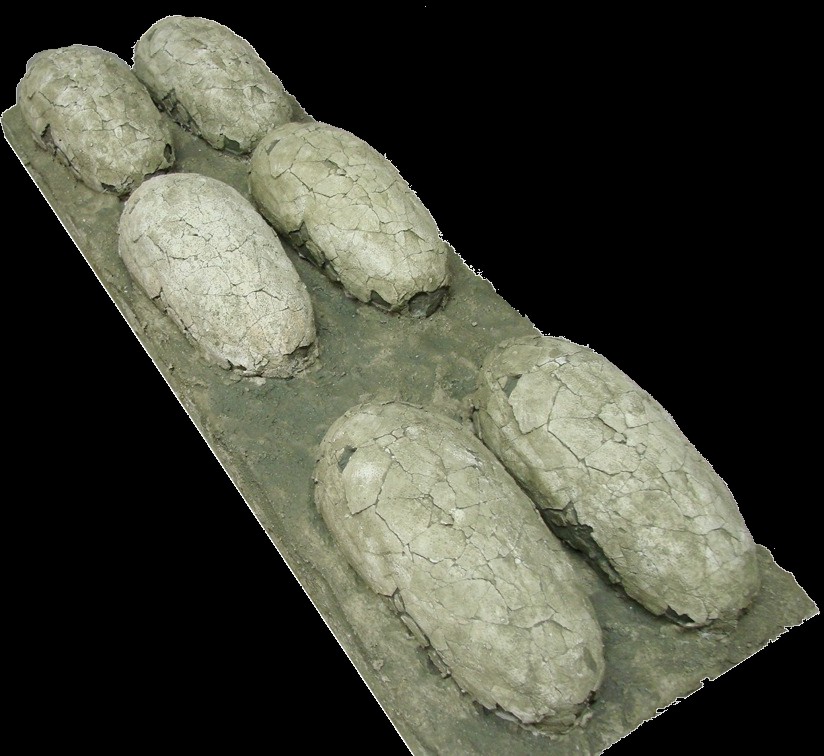 Here is another example of an Oviraptor “nest” found in Montana.  The eggs are again laid in pairs, but apparently this Oviraptor laid its eggs on the run!

This is, again, the more logical explanation – but in the original article on this “nest,” the authors claim (for some inexplicable reason) that the Oviraptor re-oriented the eggs in this position.  You see, an evolutionary perspective is programmed into you in school and via the media.  I’ve been a hard-core, young-earth creationist for almost 20 years now, and I still find myself having to de-program myself of my evolutionary assumptions that I was taught when I was younger!  Evolutionary assumptions that were colouring my world-view, and I did not even know about them.

First off, Oviraptors are found in Mongolia, not North America. Second, there is a reason why Juby does not cite the article in this lesson, and that reason is that the eggs seen above come from a Troodon, not an Oviraptor. Juby’s inability to honestly portray the evidence speaks volumes about his character. Potholer54 has a wonderful video about this specific claim from Juby.

Juby, it does not seem like you are deprogramming yourself, it seems like you are willfully deceiving yourself, and others, into believing in creationism. This blatant misrepresentation can only be interpreted as a lie and I do remember how Juby felt about being lied too. 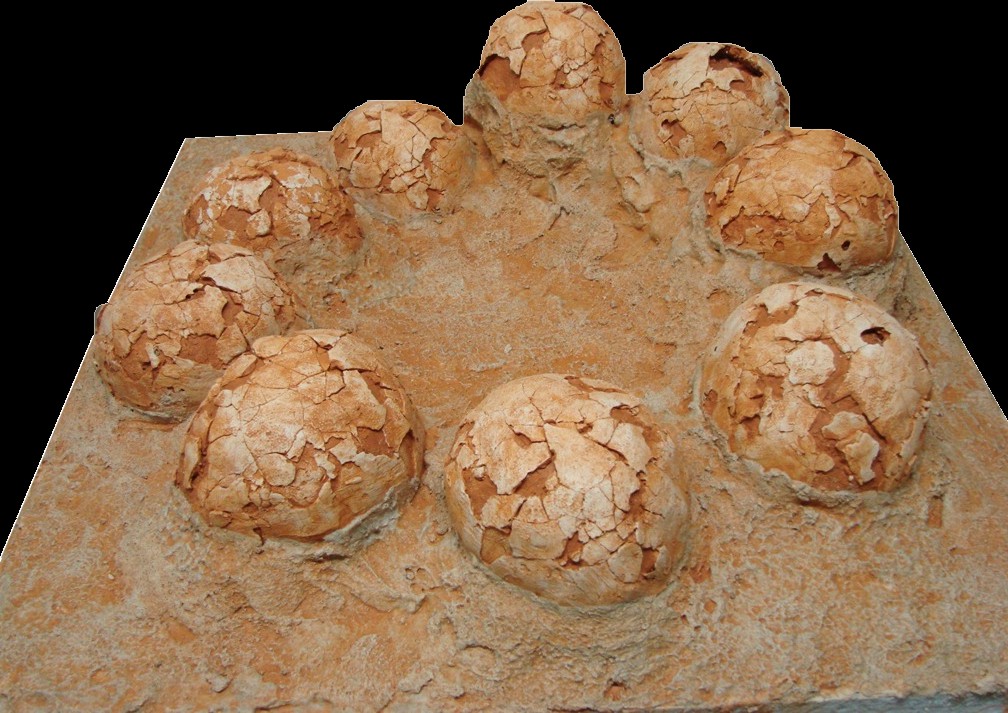 Our last nest we’ll look at today comes from a Hadrosaur.  Again, the Hadrosaur apparently stood in the middle and laid its eggs in a circle.  However, notice how the eggs in this nest were laid – each higher than the last?  Apparently between the time the first egg was laid and the last one was laid, there was mud rising around the ankles of the dinosaur!  In fact, the highest egg was actually a polystrate egg – the rock layer cut right through the middle of this egg.

Again, clear evidence of eggs being laid in catastrophic conditions, when apparently the dinosaur had no other choice.

This is not clear evidence of a catastrophe, at least not one that Juby thinks happened. Everything that Juby attributes to the fossil I can agree with, it does appear that the Hadrosaur laid its eggs in a muddy area, leading to the polystrate egg (remember polystrate fossils are not what creationists wish they were). However, making the leap from this fossil to global flood does not follow from the evidence.

Floods are seen in the geologic column and they leave evidence behind. The fossil evidence Juby points out in this lesson is not the type of evidence we would see for a flood. Again, if Juby wants to make a case for a global flood, he needs to start with the sedimentation and point to a layer in the geological column that, not only is created by a flood, but stretches around the world and dates to the same time. Without evidence like this, one cannot claim evidence of a global flood.

Coming up in the next lesson:
Nothing changes….