According to probably the UK’s most hyperbolic newspaper on a front page published on November 1 2013, “98%” of respondents to its survey agreed with a motion that there should be a “crusade” against migrants, particularly Bulgarian and Romanian ones. A classic argumentum ad populum. 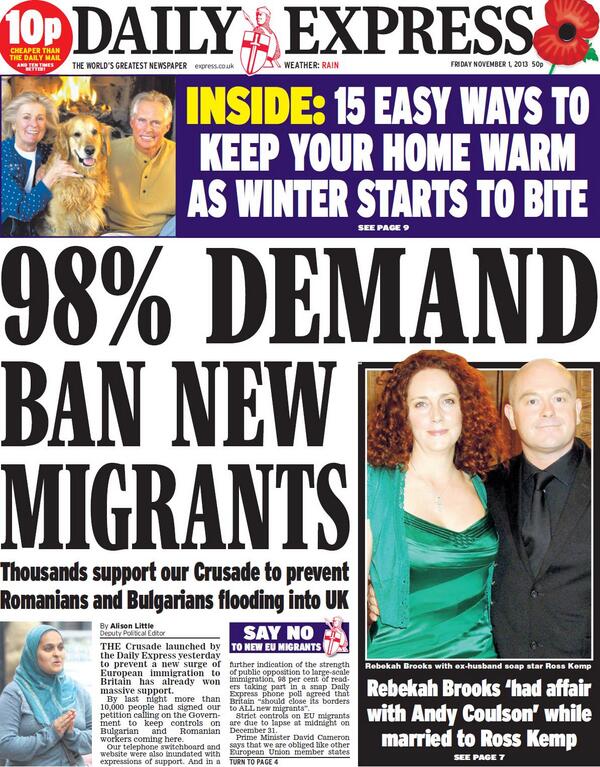 Of course what the daily express did in setting the question was to contextually load it by embedding it within a stream of highly negative information about the subject matter. The previous day, for example, the Express ran a story suggesting within it that 28 Million (emphasis on that number) Romanians and Bulgarians could be coming to our shores. Any astute observer of population statistics would immediately pick up that “28 Million” is a cumulative figure representing both the approximate populations of Romania (appx 22 Million rounded) and Bulgaria (appx 7 Million rounded) [So actually appx 29 Million, using 2012 statistics]. To suggest that all 28 or 29 Million would indeed be coming here is evidently absurd, for it would mean that there would be absolutely no Romanians and Bulgarians in, erm, Romania and Bulgaria. So why the such large number? 1) Again, tabloid sensationalism 2) Again, negative information. So that figure of 98% agreeing with the loaded question is to be sadly expected, plus the fact that only Express readers were polled anyway. If there should be a campaign against anything, it would be against conducting ridiculously biased polls like this. Of course, not that this is new to the Express anyway. Also, why the image on the front page of what appears to be an Islamic headscarf seeing that Bulgarians and Romanians are overwhelmingly Christian?